From Waste Disposal to Resource Efficiency: A Win-Win for Gunnebo Our factory in the Netherlands has found a neat recycling solution for 20,000 litres of thinner it uses each year in the paint process

Gunnebo’s factory in the Netherlands has made a significant improvement by recycling an important chemical instead of treating it as waste.

In addition, the new process is cheaper, proving that what’s good for the environment can be good for the business too.

The initiative illustrates a broader principle in Gunnebo’s approach to handling waste, moving the company two steps higher up the “waste staircase” towards the ultimate goal of preventing waste generation altogether.

The factory in Doetinchem, belonging to Gunnebo’s Safe Storage Business Unit, has found a recycling solution for the 20,000 litres of thinner it uses each year in the paint process for its main product – safes for ATM cash machines.

The thinner is used to remove, clean and flush paint from the manufacturing process and is a source of volatile organic compounds, or VOCs, which are a hazardous greenhouse gas. Traditionally the factory has sent barrels of used thinner to a disposal facility to be burned to generate electricity.

“We wanted to change this both to reduce our VOC output and implement a more sustainable solution for the thinner, which is our largest source of chemical waste from the plant,” says Jurre Kleine Schaars, the factory’s QHSE Manager.

“So we approached our chemical supplier and together began to look for a more environmentally friendly and sustainable solution.” 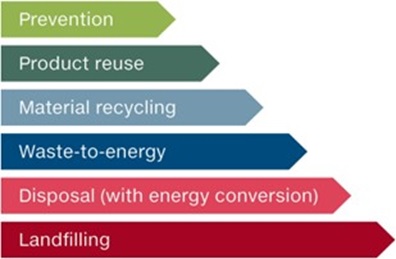 The Lansink Ladder, or waste staircase, is a hierarchy for waste management proposed by Dutch politician Ad Lansink in 1979

Gunnebo partnered with Chemische Werke Kluthe to recycle the thinner by distilling it – a process more generally known for its use in producing alcohol. Through the distillation process, almost all the contaminants can be removed from the waste thinner.

The regenerated thinner is then re-sold as a B-grade thinner to other companies. Unfortunately, Gunnebo itself cannot use the B-grade thinner in its paint system, which requires a higher level of purity.

However, by recycling the thinner instead of discarding it, our factory enjoys several benefits:

Gunnebo is now exploring this initiative to see if it can be implemented in its other factories.

“We see sustainability as an integral part of our mission to create a safer world,” says Christian Carlsson, SVP HR & Sustainability at Gunnebo. “Our aim is to move all our companies and products progressively higher up the waste management ladder towards the goal of preventing as much waste as possible.”

To read more about Gunnebo’s approach to sustainability,click here